In Germany mime is deeply entwined with Marcel Marceau, the French theatre hero who created the tragicomic clown, Bip. In Europe, particularly in the 1970s, performances by Marceau and Samy Molcho proved that mime was not a theatrical form to be easily dismissed. Back in 1909, theatrical genius and co-founder of the modern "director's theatre" Max Reinhardt also relinquished the spoken word in his sensory theatre experiments.

Bodecker & Neander have been producing their work for over 20 years, during which time they have captivated audiences and the press in more than 35 countries. Schwerin-born illusionist Wolfram von Bodecker and Paris-born Alexander Neander met whilst studying under Marcel Marceau in Paris. They graduated from his legendary school then toured the world as his stage partners before forming their own company. Their exceptional brand of visual theatre is packed with magic, the finest humour and illusion. 'Mime' is derived from the Greek pantomimus meaning 'imitator of all'. Bodecker & Neander use the term 'visual theatre' to describe their work: Silent theatre brought to life by a deft combination of mime and movement, masque, clownery, slapstick and physical theatre that also integrates elements of film, magic lantern and black box theatre.

No wonder their work ignores the boundaries of theatrical genre. The stories are joyous and enjoyable, thought-provoking and tragic. Mime makes room for the viewer's own interpretations - openings awaken the imagination.

With their visual theatre, Bodecker & Neander carry the audience to the country of their desires, to utopia. Two travellers between these worlds prove to be faithful guides who guarantee all sorts of theatrical, earnest adventure. We meet a world-famous pianist who has much to learn from the man turning the pages of his musical score. A simple music lesson turns into a nightmare. An Asian fairytale shows us a world where death and beauty sit side-by-side. Follow Light was developed using a grant and premiered at Dresden's Societaetstheater. Press reception was rapturous: "... mime at its best. The audience at the premier were so excited they went wild in the interval - clapping and stamping their feet. And again at the end. Justifiably so." (SZ)

Born in Schwerin (Germany), Bodecker initially studied the art of magic with professional magicians and toured with his own magic show. In 1992 he moved to France and completed practical training at the prestigious international mime school “Ecole Internationale de Mimo-drame de Paris, Marcel Marceau“. After receiving a rarely awarded diploma in 1995, he was engaged by Marcel Marceau for the theatre productions "Un soir à l´Eden", "Le Manteau", "Le Chapeau Melon" and "Les Contes Fantastiques", touring world-wide with the master of pantomime.

Born in Paris and raised in Stuttgart, Neander started taking mime theatre classes at the age of twelve. He furthered his studies with specialized training in “Commedia dell´arte“ and “black light theatre”. He also graduated from the “Ecole Internationale de Mimodrame de Paris, Marcel Marceau“. He has been a member of the Compagnie Marcel Marceau since 1995 and has been working with his “maestro” as a personal assistant on stage and during his soloist world tours.

“In May 1968 I was scarcely a month old. My first plays played out between the line of my schoolbooks without words, without music, only pictures separating the world of dictations from the world of calculations. These interim spaces were freedom. Not insistent stories but windows between twenty-six mistakes in a dictation and nine eights are eighty. Forty years later I feel that I made a career from this.”

Finish her studies in Pantomime and physical theater in" die Etage" Berlin. After Irene went in to the big world with the goal to awake people´s feelings. Today she creates through pantomime and dance her own pieces. During her studies Irene worked in different theater projects and festivals at home and abroad. Since december 2012 she joined Bodecker & Neander to perform in the show "Follow Light".

David moved to the Schaubude Berlin in September 2017 to be trained as an event technician with the team around Jens Angermann and Werner Wallner. During the time on site, he was involved in the technical implementation of the figure and object theater. An annual highlight was the development of productions for the international festival "Theater der Dinge". After successfully completing his training and despite the outbreak of the pandemic at the beginning of 2020, he managed to work as a freelancer and was incorporated into the productions of the Bodecker & Neander company. Since October 2020 he has been supporting the company with his knowledge of sound and lighting technology and was able to premiere the piece "Meine Gute" in May 2021.

was born in 1967 in Schladming, Austria. After finishing his studies in Photography and working several years in the arts in Graz, Austria, Werner came into contact with TAO! Theater on Ortweinplatz and his desire to do theatre was born. He has worked as a freelancing Set and Lighting Designer since 1995. From 1998 – 2006, Werner was the Technical Director for La Strada - International Festival of Street Art and Puppet Theatre in Graz. Since 2000, he has lived in Berlin and has worked as a Technician, Set Designer and/or Lighting Designer for numerous theatre companies, including Familie Flöz (“Ristorante Immortale”), Cie. Bodecker & Neander, Kaufmann & Co, Theater Strahl and the youth theatre company Departure.

Wolfram von Bodecker and Alexander Neander founded the Théâtre Mimo Magique in 1996, after graduating from Marcel Marceau's “Ecole Internationale de Mimodrame de Paris”. Since 2006 they have been working under the name of “COMPAGNIE BODECKER & NEANDER”. Their first play, SILENCE wins the Berlin Audience Award and the next production, OUT OF THE BLUE is a real success with both the public and with the press. The two artists invent the concept of the “Visual Concert”: during combined performances with large musical ensembles, such as the Stuttgarter Kammerorchester, the Arditti Quartet of London and the Gewandhaus-Oktett of Leipzig; the audience discovers a new and fascinating combination of pantomime and music. Many international tours have led the Compagnie Bodecker & Neander to travel through Europe, Asia, South America, and North America.

Thanks to the universal dimension of their visual theatre, the two mime artists appear to be particularly welcome guest at international festivals. With the assistance of director Lionel Ménard, the company performs the musical play BONJOUR, MONSIEUR SATIE !, a unique and imaginary creation based upon the music of the French composer Erik Satie, a true tribute to his life and his work. The play has been supported by the Konzerthaus Berlin, featuring regularly in the institution's program. In November 2007, the musical play TULLES ET SON OMBRE is premiered at the Philhamonie Luxembourg.

Wolfram von Bodecker and Alexander Neander, accompanied by the ensemble United Instruments of Lucilin, tell the story of the young Tulles in a poetic and colorful way to the music of contemporary composer Martin Matalon. By popular demand the company followed up their successful classic, SILENCE; with the new and innovative play DEJA-VU?, which premiered in Dresden in February 2009.

Premiere of the program "Hereingeschneit" ("Snowed In") in Dresden.  Summer

Academy at the Warsaw Mime Center, guest performance at the International Mime

Art Festival Warsaw.  Tour with Quadro Nuevo as part of the Festspiele

Premiere in Dresden: in cooperation with the Societaetstheater, the program

followed by performances of the new program throughout Germany.

in the Philharmonie in Cologne and at the Cité de la Musique in Paris. More tours to

Poland, Finland, Macedonia, Holland and Ecuador. Together with the WDR

Symphony Orchestra in Cologne, a visual concert of Stravinsky's “Pulicinella Suite” is

Premiere of "The Don Quixote Family" at the Philharmonie Luxembourg,

Menard and with compositions by and featuring the cellist Elisabeth Naske.

Performances of ¡silence! and “Out Of The Blue” bring the duo to Finland, the

"Faust Without Words", directed by Tom Quaas and Lionel Ménard.  Both press and

Tour with ¡silence! in the cities of Mexico and Argentina. Appearances at theater

festivals in Finland and Poland.

Venezuela. The highlight of the tour is a performance in the Teatro Teresa Carreño,

which, with seating for 2,500 spectators, is the largest theater in Latin America.

at the Opera of Lille in France. “Out Of The Blue” is performed for the first time in

“Out Of The Blue” tours Argentina and Peru.  Premiere of the visual concert

“CelloCinema” with Eckart Runge from the Artemis Quartet and Jacques Ammon.

Working together with the Luxembourg Ensemble LUCILIN, “Tulles and his

Shadow”, a visual concert for children, is created. Premiere at the Philharmonie

Recklinghausen. Guest appearance of “Bonjour, Monsieur Satie!” at the

homage to Erik Satie. Under the direction of Lionel Ménard, the musical pantomime

“Bonjour, Monsieur Satie!” celebrates its premiere in January 2005 and since then

has been a regular part of the playbill.

his two-month tour of Germany.  The duo look back upon this time fondly, as it was

the last tour with their master.

Germany.  “Out Of The Blue” tours Switzerland

Tour to China for International Art Festival with ¡silence!.  United States debut of “In

the Upper Room” by Philip Glass, together with the Stuttgart Chamber Orchestra.

In cooperation with the North-West German Philharmonie, a new visual concert, “La

Découverte”, based on Philip Glass’ Symphony No. 3, is created.  Tour of Germany.

Creation and premiere of “Out Of The Blue” in the Academy of Arts in Berlin,

directed by Lionel Ménard. Tour to the United Kingdom, Venezuela and Germany.

theater performances set to music by eight contemporary composers. With the

produced and directed by Lionel Ménard. “L'Etoile Filante” is premiered at the

Theater Stuttgart. Philip Glass arranges his music “In The Upper Room” for the

Stuttgart Chamber Orchestra and pantomime theater. With this, the third visual

concert “Romeo and Romeo” is produced. Performances at the Mercedes Forum

Stuttgart, the Schleswig-Holstein Music Festival, and at EXPO2000 in Hanover.

In cooperation with the Leipzig Gewandhaus Octet, the “Concert Visuel en Françaix”,

homage to the French composer Jean Françaix, is premiered. This new genre is a

great success at the Gewandhaus in Leipzig and the Semperoper in Dresden.

¡Silence! wins the Audience Award at the Berlin Mime Festival and goes on tour to

concepts for a "visual concert" develop.

and Neander for his new mime drama “Le Chapeau Melon”, which is world

The duo’s work together begins on a luxury liner. Among the diverse impressions 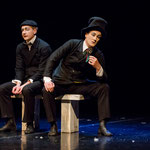 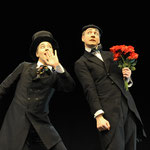 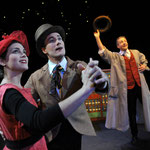 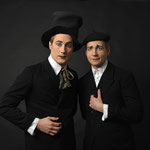 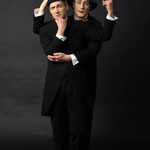 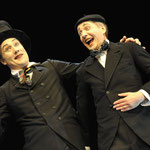 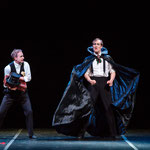 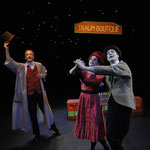 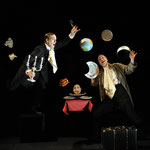 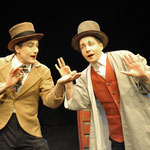 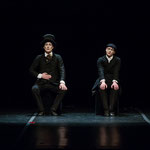 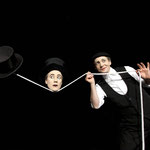 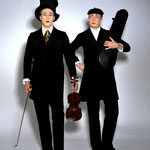 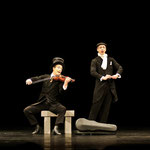 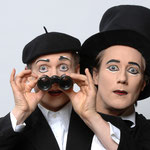 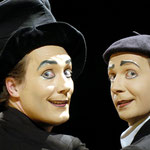 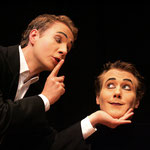 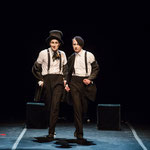 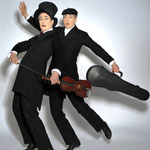 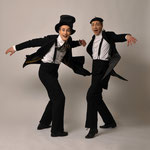 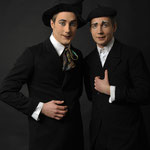 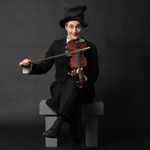 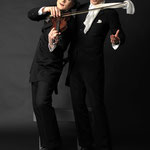 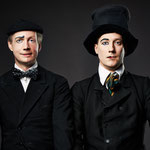 You want to watch and enjoy our performance "Snowed in" at home in your living room, then click on the large picture and you will be redirected to our VIDEO ON DEMAND page at Vimeo. There you can rent the video for a week or buy it as a download.

We hope you enjoy our winter program.